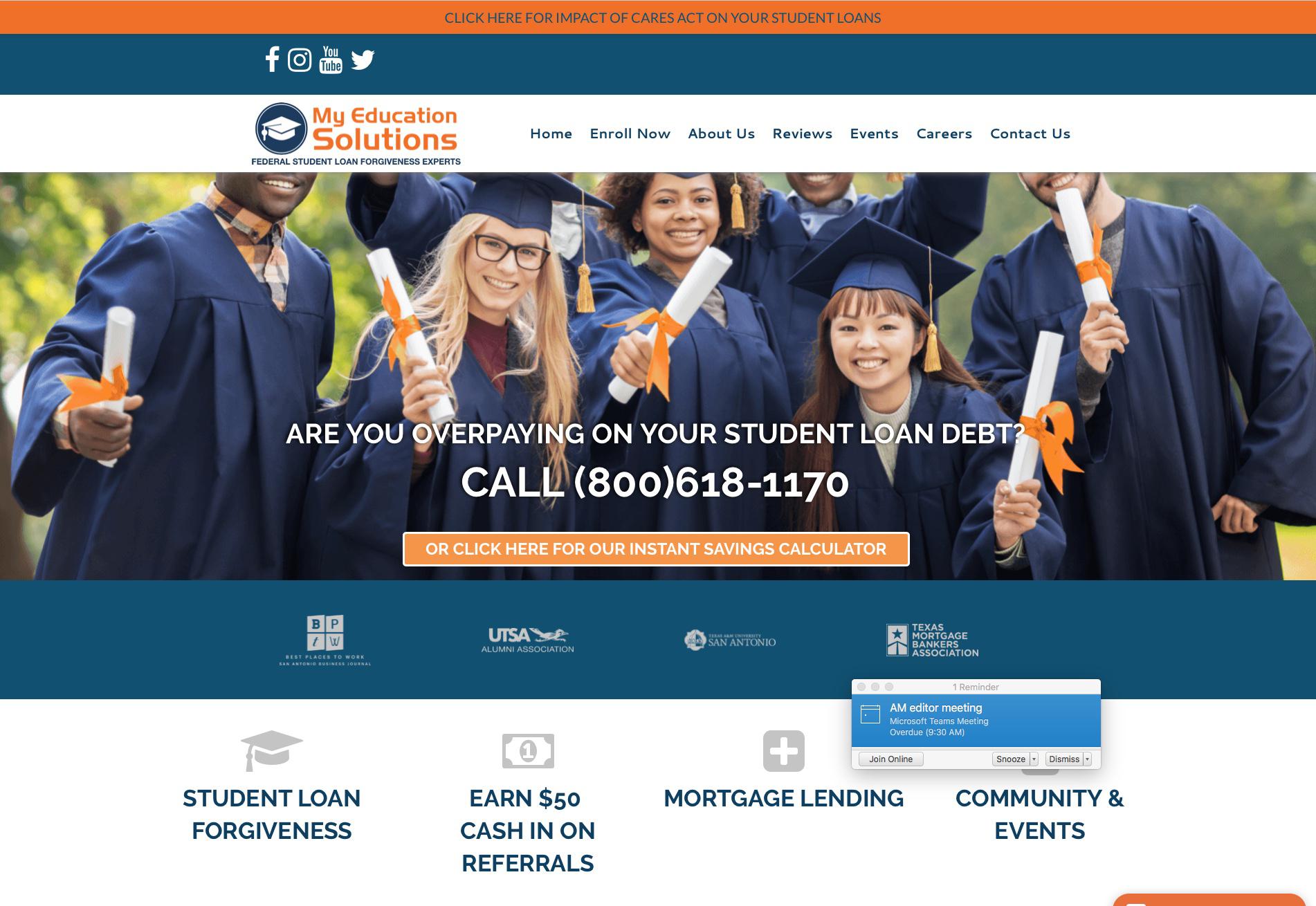 San Antonio’s My Education Solutions has touted that it has saved more than 2,000 clients some $150 million in student loan debt, allowing them “to live the life they dreamed of.”

Texas Attorney General Ken Paxton has a much different take on My Education Solutions, alleging in a lawsuit that it charges what amounts to thousands in fees for loan-forgiveness services that are available for free elsewhere.

“Consumers end up paying more money on their student loans and face the possibility that their loans will not be forgiven at the end of the term due to MES’ deceptive practices, which include failing to pay the consumers’ student loans,” the suit alleges.

The state seeks more than $1 million in penalties, consumer reimbursements and attorney fees from MES and its CEO and president, Christina Randell. The action was filed Friday in state District Court.

The state also seeks injunctions preventing MES from destroying books and records, making any unauthorized withdrawals from consumers’ bank accounts and engaging in deceptive advertising, among other activities.

A call to Randell was not immediately returned Wednesday, and the attorney general’s office did not respond to an email seeking comment.

Randell previously operated Texas Debt Free Angels, a credit repair company. In 2014, it was issued a cease and desist letter from the Texas Office of Consumer Credit Commissioner for operating a debt-management service without registering with the state. MES also is required to register with the OCCC but has failed to do so, the suit says.

MES, which calls itself a “national consumer advocacy organization,” has received an “F” from the Better Business Bureau — the bureau’s lowest rating. The BBB also issued an alert, saying it was unable to substantiate several advertising claims about how much MES saved consumers. The BBB says information provided by MES showed that some consumers had “negative total savings on their student loans after enrolling” with MES.

“When asked how Randell arrived at that figure, she replied that it was calculated from her database and that some consumers could receive less than a 70% reduction,” the suit says. “Randell also claims that MES saved consumers over $100 million between October 2015-2016, but has no concrete proof to back that figure up.”

MES also told consumers there was no cost to enroll, but charged a $199 one-time enrollment fee and a $49 monthly “maintenance fee,” the suit says. Enrolling in the program will cost a consumer more than $6,000 in fees over 10 years, though some loans can take up to 25 years to pay back.

Repayment programs may be based on a consumer’s income, the suit says, so it’s possible a consumer may owe nothing for years. Yet MES will still charge a consumer the $49 maintenance fee to “submit” a “$0 payment,” the complaint adds.

Texas Inc.: Get the best of business news sent directly to your inbox

The lawsuit cites a consumer who paid a one-time fee of $99 to enroll in a loan forgiveness program. The consumer made three monthly payments of about $280 even though his first payment wasn’t yet due.

In addition, the suit says, MES did not pay the consumer’s loans on time, resulting in the account being marked delinquent by the loan servicer. The consumer later terminated his contract with MES, but the suit says it refused to refund the payments that were not applied to his loans.

Another consumer, a teacher, says she discovered that MES had requested a forbearance on loan payments on at least three occasions — even though she never authorized them to do so. MES continued to take her money during that time, according to the lawsuit.

A former MES employee provided a printout to the attorney general’s office that indicated on one account a consumer had made 12 payments on his loan but only six of them were counted as part of the program he paid MES to enroll him in, the suit says.

The state is suing MES for violations of the Deceptive Trade Practices Act, failing to register with the OCCC and misrepresenting the benefits of its services, among other claims.

MES has not yet filed a response to the lawsuit.

Donna L. Perkins Celebrated as a Woman of the Month for June 2020 by P.O.W.E.R. (Professional Organization of Women of Excellence Recognized)