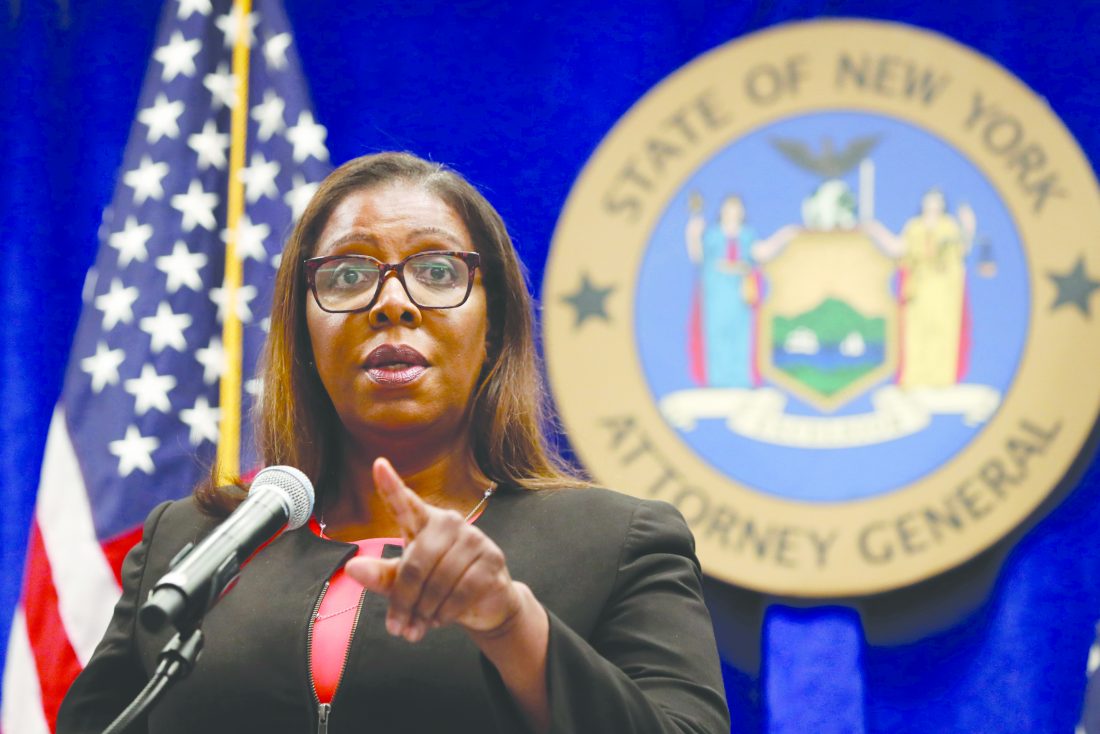 In this Aug. 6 file photo, New York State Attorney General Letitia James takes a question at a news conference in New York. During a Tuesday media conference call on an initiative, dubbed “Operation Corrupt Collector,” James offered frank advice to older people who are often seen as easy marks for dubious debt collectors. “Senior citizens, as I always say, they’ve earned the right to hang up and to be rude,” James said. “Most seniors are not rude, but when it comes to individuals engaging in illegal conduct, they should hang up and report the collector to the FTC immediately.” (AP photo)

NEW YORK — Those mysterious debt collectors who call insisting you’ll be in legal peril if you don’t pay them big bucks are in hot water themselves, accused in a nationwide crackdown of harassing and threatening consumers including seniors, often about debts that don’t actually exist.

The Federal Trade Commission on Tuesday highlighted enforcement actions filed in recent months against two South Carolina-based debt collection firms accused of bilking people out of a combined $17.2 million, as well as settlements with three other firms accused of using pressure tactics and other shady practices.

Ironically, the firms that agreed to financial settlements were unable to pay the full amounts.

While consumer complaints about debt collectors have dropped slightly since the start of the coronavirus pandemic in March, the commission’s consumer protection chief, Andrew Smith, anticipates that will change as collectors increasingly target people experiencing crisis-related financial hardship.

Of more than 85,000 debt collection complaints from consumers this year, the FTC said nearly half pertained to debts that didn’t exist or to abusive and threatening practices.

“Now would be about the time that this would start — that we would start to see consumer complaints associated with financial distress caused by the pandemic,” Smith said. “This might be debt collection complaints; it also might be complaints about various credit repair organizations or debt relief, mortgage relief and debt settlement.”

The commission, working with other federal agencies and authorities in 16 states, is also launching a campaign to give consumers tips on what to do when confronted with a debt collection call. It includes a tip sheet with potential red flags, such as a collector refusing to provide the name of his or her company, the amount of debt or the original creditor.

“Senior citizens, as I always say, they’ve earned the right to hang up and to be rude,” James said. “Most seniors are not rude, but when it comes to individuals engaging in illegal conduct, they should hang up and report the collector to the FTC immediately.”

James’ office was involved in two of the three settlements featured in the crackdown. Both companies based in the Buffalo area were permanently banned from the debt collection industry under agreements reached in December and February.

In the two pending cases in South Carolina, filed in July, authorities have obtained temporary restraining orders halting the companies’ operations, freezing their assets, and putting them under the control of a receiver.

National Landmark Logistics LLC and Absolute Financial Services, LLC, both based in Fort Mill, South Carolina, are accused of using deceptive robocalls and trickery such as claiming to be from a mediation or law firm rather than a debt collector, threatening legal action and using a target’s personal information to make it seem as though the threats were real.

A lawyer for National Landmark Logistics LLC declined comment. A message seeking comment was left with a lawyer for Absolute Financial Services LLC.

Today’s breaking news and more in your inbox