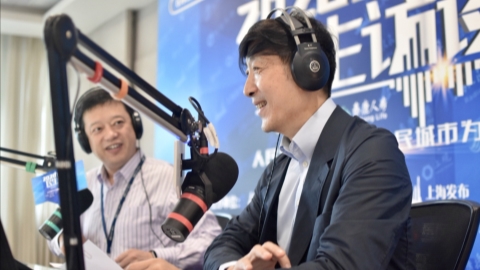 Shanghai registered 37,539 new enterprises in May, a rise of 19.1 percent from the same period last year, thanks to a continuously improving business environment, the city’s market watchdog said on Wednesday.

The daily number of newly registered companies in the city hit 1,976 last month, up 31.6 percent, the Shanghai Administration for Market Regulation announced.

“Authorities have improved the system, reformed procedures and cut the amount of materials required to be submitted when people establish new companies in the city,” Chen said during a radio program.

Previously, companies were allowed to apply for electronic seals only after they received physical licenses and seals, which are mandatory in order to operate a business, said Chen.

Under the new move, electronic licenses and seals are automatically generated when a company’s business operations are approved, and they can receive both at the same time via mobile phone, he said.

Business licenses have been issued to 130,800 companies under the new system as of June 5, according to the administration.

Authorities in the city have also cut unnecessary market access and operation thresholds to spur the vitality of the market, the administration said.

Multiple approval materials involving different government authorities have merged into a single permit service for companies when they apply to open restaurants, cafes, supermarkets and groceries to simplify application materials and cut review and approval time, the administration said.

The concurrent examination and approval of licenses for health product manufacturing, wine sales and food operation is promoted with the goal of single application and synchronous processing, Chen said.

“The license involves different permits such as health and fire, and different government authorities, and the information-sharing mechanism makes it convenient for applicants,” said Chen.

Paperless online review and approval have been deepened to prevent the risk of cross-infection during the novel coronavirus epidemic, said Chen.

In one case, an enterprise in Jing’an District obtained a business license under this model as its four shareholders were in different locations such as Beijing, Shanghai and Zhejiang Province, making it inconvenient for identity authentication.

In the past, they needed to submit materials at service windows, but the new practice allowed them to do the procedures online, said the administration.

Authorities in the city have also used remote online reviews of enterprises’ applications of relevant qualifications, according to the administration.

To help enterprises resume operation and production, the administration released nine policies on credit repair such as streamlining procedures for companies producing prevention items for the coronavirus which apply to be removed from the abnormal operation list if they submit all required materials and affirm they are real and legal, the administration said.

“Authorities will also use information technologies such as the Internet, big data and artificial intelligence to promote innovation in administrative approval system,” said Chen.

Those who can submit e-versions of certificates will be exempted from submissions of real ones, and the target is electronic, convenient and standard administrative review and approval of market supervision and management affairs, the administration said.

The system is the most economic and effective food safety control system recognized internationally, and it ensures food safety by identifying detailed hazards and key control measures during the food-manufacturing process, said Chen.

Food safety is addressed through the analysis and control of biological, chemical and physical hazards from raw material production, procurement and handling, to manufacturing, distribution and consumption of the finished product under the system.

Market watchdog officials have busted 442 cases regarding the epidemic with inspections covering 670,000 business venues and companies, and officials have handled 40,011 complaints and tip-offs about coronavirus from consumers, retrieving economic losses of more than 100 million yuan for them, according to the administration.

Among the 442 cases, 160 involved price violations like gouging and 107 involved quality violations such as making and selling fake or substandard products, according to the administration.

Wileena Joseph Struggled With Her Finances And Knew Many Others Did Too, So She Decided To Create A Business To Help Thousands Of Others