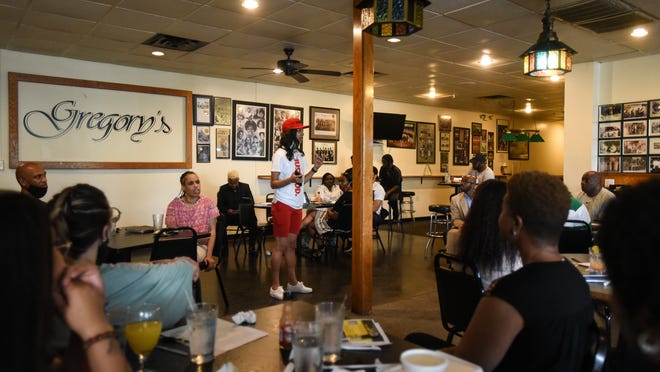 On a recent Monday night, a group of Black business owners, entrepreneurs and activists met at Gregory’s Soul Food in northwest Lansing. They swapped stories. Shared business ideas. Heard presentations from a life coach, a bodybuilder, a tour guide, a plant shop owner.

Their goal was simple: Black economic stability for Greater Lansing.

Since last fall, Gregory’s has served as the meeting place for Black Wall Street of Lansing, a networking group aimed at building a self-sufficient Black economy in the city. The group takes its name from Tulsa, Oklahoma’s Greenwood District — a.k.a. Black Wall Street — a once-thriving Black business district burned to the ground by a white mob 100 years ago this week.

Black Wall Street of Lansing co-founders Leo Brown and Ahsahki Guy started the group in November to address issues they say stem from a lack of Black ownership in Lansing, including a dearth of Black-led educational institutions, grocery stores and community programs.

“We’re trying to create an incubator in our own city to build people’s businesses and use it as a networking hub to get people’s big desire — give people a sense of hope and unify our dollar to build Black economics here in Lansing,” Guy said.

In starting the group, Guy and Brown sought to replicate what was destroyed in the Tulsa massacre, which raged from May 31 to June 1, 1921. At the time, Tulsa’s Greenwood District was the wealthiest Black community in the United States. After violence broke out surrounding the arrest of a Black man for assault on a white woman — charges that were later dropped — a white mob tore through the Black neighborhood, burning businesses and shooting from overhead in private airplanes.

The mob destroyed 35 city blocks, 1,250 homes and virtually every business. Experts estimate up to 300 were killed.

The Lansing group wants to prevent something similar from happening again — and to be prepared the next time a world-changing event like COVID-19 exacerbates preexisting racial inequities.

“We’re trying to start something so big that when COVID or any type of tragedy happens again, we have a place we can go to for financial stability, for agriculture so that we can eat, for shelter so that people don’t go homeless,” Brown said. “Because anything can happen.”

So far, Brown has hosted five monthly networking events, which he calls “think tanks,” at Gregory’s. This month’s event on May 24 centered on the Tulsa centennial and how to network.

Brown, a jack-of-all-trades who works as an actor, designer, promoter and barber at Mo-Cuts, started hosting sporadic networking events at his home in 2014. They caught on, but lacked a concrete plan of action, he said. So he paused the meetings while he honed his chops in design and cosmetology and relaunched Black Wall Street with a mission of improving Lansing from the inside out.

“We’ve made a lot of genuine connections with people who are willing to help others,” Guy said. “And that’s what we want to start seeing more of — not competition, but people coming together to help one another collectively, because we all want to see Lansing thrive.”

Their next community-facing event is a 5K walk/run June 20 at the Capitol. The race celebrates both Father’s Day and Juneteenth, a holiday commemorating the emancipation of enslaved people in America. The group is soliciting donations to Black Wall Street leading up to the race.

Quesha Taquay, who consults on credit repair under the nameThriving Credit Solutions, joined Black Wall Street of Lansing to help make her city a hub for Black business. She said Monday that while there are barriers to attaining wealth for Black residents of Lansing, the pandemic and a heightened focus on racial equity has spurred many into action.

“People have (been) challenged a lot during the pandemic. There’s been so many blessings and (so much) heartache,” Taquay said. “(But for) those that have persevered, it’s the right time to make some movement happen.”

She added that not everyone who attends a Black Wall Street think tank need be an entrepreneur or activist. At Monday’s session, she overheard a recent college grad express gratitude to others for sharing their ideas and building off one another. For him, it was a networking event — a way to find and connect with likeminded people.

Black Wall Street of Lansing’s next step is an “each one teach one” program, in which established business owners will be paired with young people to mentor on entering different industries.

The program, Guy said, will allow older business owners to pass down hard-earned wisdom to Black youth, such as how to devise a business plan, raise funds and get a loan. Guy also hopes to lead after-school programs on gardening and growing food to focus young people’s minds on “positive things,” she said.

As for Black Wall Street of Lansing, the sky’s the limit.

“This is the very beginning, and they’re in the phase where they need to have the community lifted,” Gleason said. “My hope is they don’t run out of steam and keep going — remain focused and have the gentrification in town done by Black business owners and not other elites.”